“It is a little masterpiece… It is perfectly homogeneous in style on the outside and charming in its proportions. Inside, the semicircular arch and the soft ogive are pleasantly combined. The details are of a tasteful and rich simplicity. One descends by a beautiful staircase to a crypt which overlooks the ravine and the torrent. Built late (mid 12th century) in limestone in a granite country, the church dedicated to Our Lady is in Romanesque style.

The west facade has been reworked after the probable removal of one or more bays at an unknown time. In the south aisle is the tomb of Guillaume de Naillac, Lord of Gargilesse from 1238 to 1266.

Notre-Dame has one of the most beautiful sets of capitals in Berry. An admirable “comic strip” carved in stone, mixing, in 129 capitals, fantastic and symbolic animals (lions, centaurs, birds…) and scenes from the Old and New Testaments.
The most famous, probably inspired by the tympanum of Moissac (Tarn et Garonne), represent, three by three, the twenty-four elders of the Apocalypse. 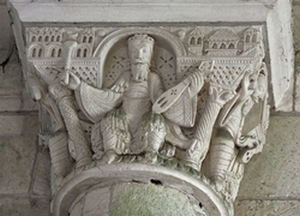 Under the chevet of the church is a vast crypt accessible by a staircase in the south aisle. Its vaults are decorated with frescoes dating from the 13th to 16th centuries, also depicting scenes from the Holy Scriptures. The wooden statue of the Virgin Mary above the altar is said to have been brought from the East by a crusader. The church is open all year round for free visits . During the summer season guided visits are organised.