The Origins :
The site of Gargilesse, situated on a shale peak following the bank of the river, was used as a military base in gallo-roman times. A Lord by the name of Gargilius founded a Castrum. Nothing is left from this edifice and memories of the past have been lost in the annals of time… Historically speaking, in the 8th. century the “Cuens” or Counts of Gargilesse built a strong fortified castle and were eternally at war defending their lands. At the end of the 10th. century, during the reign of Robert le Pieux, Hugues de Gargilesse was a very famous lord. In the 12th. century, Hugues de Naillac, became Lord of Gargilesse (by marriage). He earned his renown after having led an army of people from the Berry on a crusade to the Holy Land. On his return he brought back a statue of the Virgin Mother that had been given to him by a monk in Constantinople and that had protected them during battle. Hugues de Naillac built the roman chapel next to the castle to house the venerated statue. The communicating door between the castle and the church was walled up when the church became a parish church, but has preserved it’s beautiful capitals and the frescos in the crypt. As many others, the Naillac family was torn apart in these long troubled times ; some members of the family were in favour of the English and had their lands confiscated by the King. Others faithful to the french King were killed in battle. Since the Naillacs lacked a direct heir, Gargilesse was left to Jean de Prie in 1389, and then to the Châteauneuf family. The Renaissance :
In 1518, Antoinette de Châteauneuf who’s dowry included Gargilesse, married Jean de Rochefort. He was taken prisoner in Italie during the battle of Pavie whilst fighting with François the 1st and later on became Chamberlain and adviser to the King. In the begining of the 17th. century, Charlotte de Rochefort sold the castle to a rich gentleman landowner by the name of René du Bost du Breuil, who was very desirous to use the title of Count. His coat of arms are sculptured on the lintel of the entrance door and above the door of the main reception room. He was to be the ruin of Gargilesse. Partisan of the Fronde, he fled to Gargilesse with 91 men of arms, 29 servants and 150 horses. The castle was under for 15 days, attacked by a detachment of Turenne’s army ; burnt and demolished. Gargilesse in ruins slept for a hundred years…

The Century of Light :
In 1750, Olympe de Chevigny who was a descendant of René du Bost built a “new castle” on the ruins of the old one. It is the 18th. century style manor-house that we now visit. Only the postern and parts of the buttresses are left from the original feudal castle. The square tower dating from the 17th. century was conserved when the castle was rebuilt, and used as a mausoleum for the Lords of Gargilesse. Louis Charles Pierre du Bost du Breuil was taken prisoner in the Reign of Terror but escaped the guillotine and retreived his lands and castle that had been under seal. 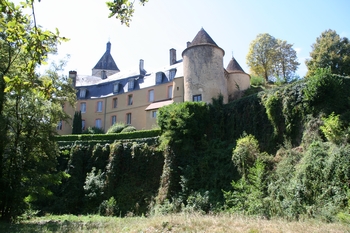 The Romantic Period :
George Sand presents us the last member of the Gargilesse family Antoine Charles du Bost du Breuil :
“He’s a big strapping fellow of 80 years old who still gets around completely on his own. Following steep paths in the scorching heat, he covers his vast property on foot. Living on his private income of 50,000 livres, they say, I don’t know if he’s ever restored anything, but he’s never destroyed anything either. We can be grateful to him for that.” Modern Times :
This was Count Bernard de la Barre, Louis Léon de Danne, former deputy, journalist and man of letters who died in 1986. The last owner of the Castle, he was the great-grandson of Antoine Charles du Breuil du Bost.
From 1960 to 1986, the building had fallen into oblivion, the prey of ivy and vandals. A couple of private individuals saved it from total ruin in restoring this great work completely… In 1998, an artist who has a passion for antique stones became the new owner of the castle. She continued the restoration and had the idea of creating an Art Gallery. This prestigious site now dedicated to contemporary art, was opened to the public in 1999.